The 7 mile hike saw the team ascend 2,372 feet up the mountain, in unpredictable weather. The incredible views from the summit were a beautiful reward for the team, who have raised over £1,480 to help improve the lives of more people living with arthritis in the UK. You can still support the fundraiser on our Just Giving page.

“Climbing or scaling a mountain can seem daunting on paper but when you’re surrounded by like-minded people who share the same values, that’s half the battle. No matter your age, perceived lack of physical ability or nagging self-doubt anyone can complete the Trek and meet new people & make new friends during the process. The opportunity to raise money for a great cause and gain a rewarding sense of achievement at the same time is definitely a draw to take part in the Trek.”

This event was sponsored by our partner, Western Power Distribution. Learn more about our partnership here. 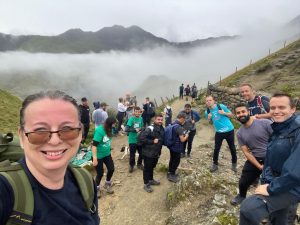