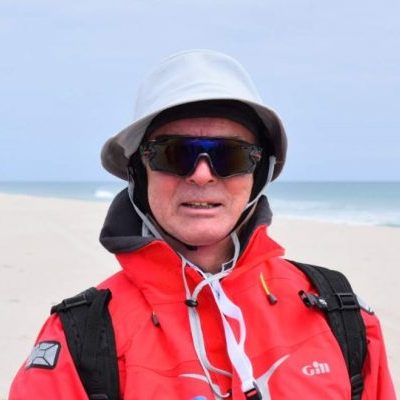 Arthritis Action member and travel-enthusiast Leslie discusses how he has adapted to living with arthritis and doesn’t let his diagnosis hold him back.

I’ve been living with osteoarthritis since September 2019. I slipped badly, which caused pain when I fell, and my right leg turned almost black. I went urgently to my local hospital minor injuries unit, who reassured me that it was just a bad bruise and I could shortly continue my normal activities.

Soon after, I flew to Canada to the town of Sydney (yes, it has the same name as a place in Australia!) and joined an expedition ship to explore a remote island called ‘Sable’ off the coast of Canada. My father was shipwrecked there during World War Two, and I wanted to discover the challenges he had to survive until rescued. During my travels the pain in my leg got noticeably worse – getting on and off the shore shuttle craft and crashing into the powerful sea became trickier as the trip went on – however I made an effort to push myself and not let the pain affect my trip too much.

On my return I contacted my GP who determined via a hospital ultrasound scan that one of my quadriceps had detached. It was quite painful, but I was told it was not impossible to live with.

Unfortunately later on in the trip, due to the new weakness in my right leg, I landed heavily on my left knee when jumping onto another boat. My knee then swelled up and became very painful. Further scans were arranged, which I unfortunately had to wait three months for. It was found that I had torn an internal ligament due to my accident and it I had triggered osteoarthritis; however, even without the injury I would have got it eventually as my cartilage had already become thin. Annoyingly the hospital also said that it was too late at that point to do anything to reverse the damage.

The pain really began to kick in around February or March of 2020. I would describe it as ‘constantly humming’, and always present no matter what. It began to affect my balance, and I found myself very tired compared to before.

I decided to see a GP for further information about my condition, however there wasn’t much movement for the first year or so, due to how busy the NHS was during the pandemic.

“It’s important to keep my muscles strong and not let them waste away, or else I’d be in an even worse position. I try to get up and move about as much as I’m able. Not enough to trigger the pain, but enough to keep active and keep my morale up!”

It’s surprising how easy it is to get confused about your condition and its symptoms when you lose the ability to see your healthcare practitioner. I’ve worked in healthcare previously, helping to battle breast cancer, so I’d say I know a lot about the sector. However, even I got lost at times with all the different medical terminology and information out there. You don’t know what the problem is or where your limits are.

I ended up doing some of my own research around osteoarthritis on the internet. This is where I first came across Arthritis Action. The website gave me a lot of helpful pointers. I had very little information about osteoarthritis when I was first diagnosed, so I found the Arthritis Action website very useful for finding arthritis-friendly resources and local services near me. Their interactive map was particularly useful at showing the locations of all the Associated Practitioners near me.

I enjoyed the Online Group meetings and online exercises offered during the lockdown, which let me speak to others with arthritis when we weren’t able to leave the home. It can be easy to become isolated, but the Online Groups allow me to be sociable, have conversations, and hear feedback from others in a similar situation to myself. From these contacts, I have learnt how to be positive in my new life to take on new challenges. I now enjoy exploring my local area on my electric bicycle, as well as gardening and exchanging experiences over internet. It is also great to have time to sort out my souvenirs and photos! I’d recommend anyone with arthritis look into joining an Arthritis Action Online Group for their area.

It’s certainly been a learning curve since being diagnosed with osteoarthritis. I’d obviously heard the term arthritis before diagnosis, but it didn’t mean much to me. I was worried I’d lose all of my energy, and wouldn’t be able to keep up the pastimes I enjoy like sailing and walking.

The truth, in fact, is that osteoarthritis wasn’t an end to my activities at all, but more like a shake-up. I certainly had to reorganize my life and make sure I was managing my time and energy. Some days I can’t do much at all, sometimes I can do more, but either way I have to pace myself.

It can be easy to sit in a chair in pain and do nothing, but that’s not me. I know that would just make things worse. I have to get out of the house and get some fresh air, whether that’s cycling when I can or just doing the gardening in the afternoon. It’s important to keep my muscles strong and not let them waste away, or else I’d be in an even worse position. I try to get up and move about as much as I’m able. Not enough to trigger the pain, but enough to keep active and keep my morale up!

I’ve accepted that some things may not be possible, so I try to focus on what I can do. I’ve become normalised to my situation. I’ve learnt not to be negative about living with arthritis, but instead to focus my attention on what I’m still able to do, now and in the future.